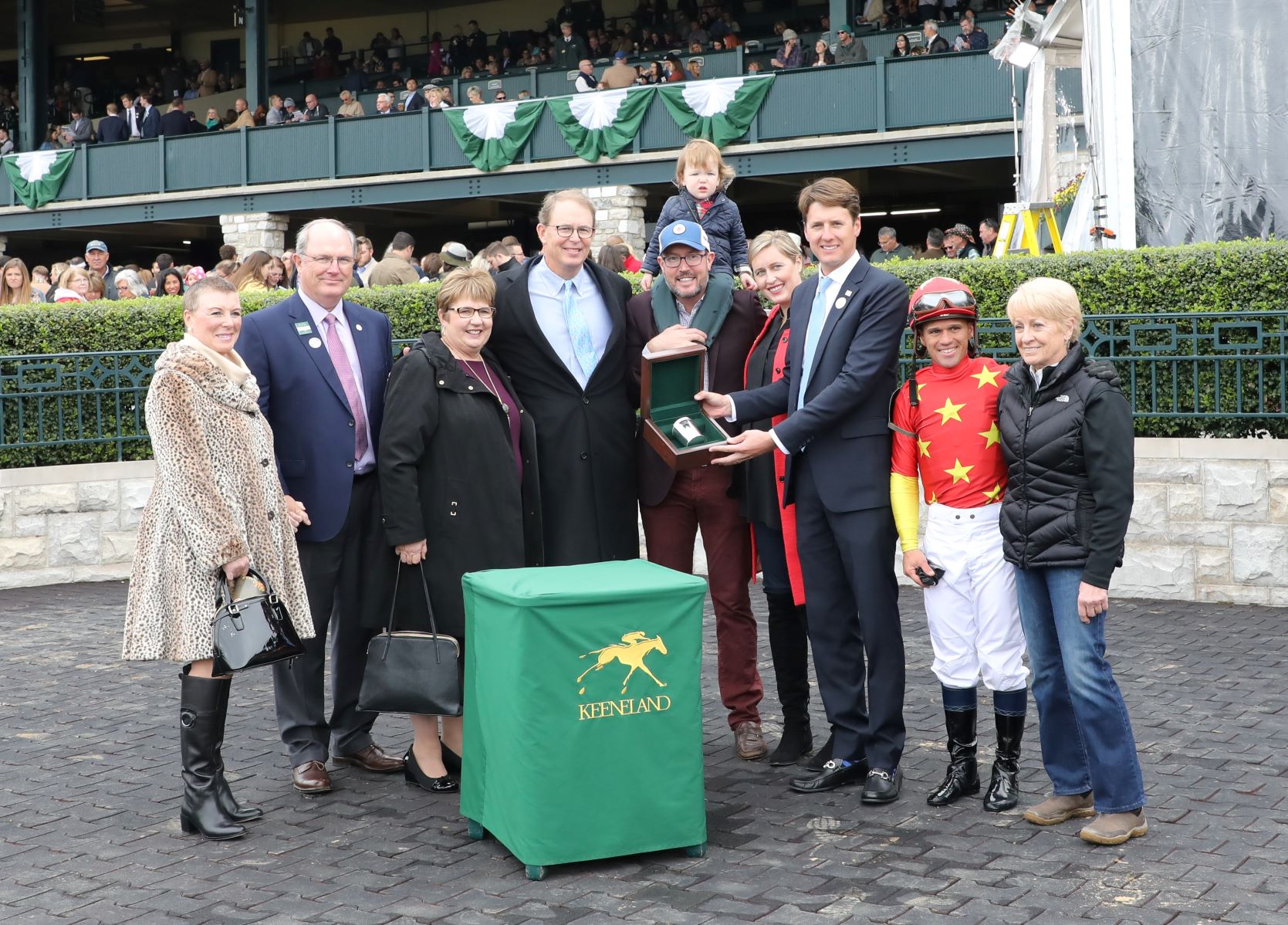 Though Cooper Sawyer was born in the Bluegrass, he moved from Lexington at 13 before making his way back Northern Kentucky to finish his high school career at Beechwood High School. With a passion for racing and his heart set on the horses, Cooper studied Equine Business Management at Lexington Community College so he didn’t have to leave the Bluegrass again. Once he had completed the equine courses at LCC (now Bluegrass Community and Technical College) Cooper transferred to the University of Kentucky, where he graduated with a degree in Agricultural Communications, Education and Leadership in 2005. (UK did not offer their Ag Equine Program at the time Cooper attended college, he notes.)

Growing up, Cooper’s immediate family was not involved in the Thoroughbred industry, but they did have close family friends who were entrenched in multiple facets of the industry, so he was exposed to both racing and breeding from a young age. The family friends had horses that ran at both Keeneland and Churchill, so Cooper spent quite a bit of time at the tracks with his family and theirs. “My dad would get us out of school early one Friday during the spring and the fall meets when Keeneland was running,” Cooper reminisces. “Racing gives me such good memories of family.”

“I feel like I have always loved the racetrack and wanted to pursue a career within the Thoroughbred industry,” Cooper explains. “I always enjoyed talking horse racing with my dad and his friends, particularly during the Derby prep races in the Spring. It was definitely in my blood from an early age!”

Cooper worked on the track during the summers while he was in high school and originally thought he wanted to return to the track post-graduation. His way of thinking was changed, however, when he decided to expand his industry experience and get a job on a farm to better understand both the breeding aspect and working with foals and yearlings. Lexington was the obvious choice for this industry exploration.

However, though Cooper moved to the heart of horse country, he had a hard time finding farm work on a part-time basis. “I spoke with Garrett O’Rourke’s brother Brian during my search and he mentioned KEMI to me,” Cooper says of learning about the program. “After learning more about it, it seemed like the perfect opportunity.” 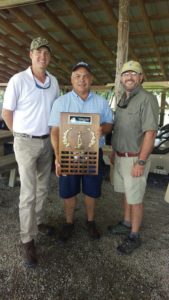 The Start of Something Great

“I was very anxious to start the program,” Cooper said. “I would finally get a job on a farm, in an industry I wanted to pursue AND I was able to take a semester off school to do it! It was all very exciting.” Similar to other KEMI grads, one of Cooper’s favorite take-aways from the program was the relationships he built and cultivated while a student in the KEMI program. “I was very fortunate in my placement [at Wimbledon Farm] and I was able to learn from the best team of horseman under the management of Brian O’Rourke. The divisional managers, foreman, and Drs. Brown and Rathgeber were second-to-none, and provided me with an education and experience that was invaluable.” Wimbledon Farm, where Cooper was placed, encompasses over 1,000 acres on the south side of Lexington. The farm boards mares and preps sales horses. Once Cooper’s semester with KEMI ended, he returned to school, but his connection with Wimbledon remained; he worked at the farm during breeding seasons. After graduation from UK, Cooper was focused on gaining more experience with yearlings. He secured a job with Mill Ridge Farm in Lexington, prepping yearlings under Donnie Snellings. Nearly 300 acres, Mill Ridge Farm boards mares, stands stallions, sells horses and offers bloodstock consulting through Nicoma Bloodstock. Mill Ridge is renowned in the Thoroughbred industry for putting the horse’s welfare at the forefront of every decision.

“The leadership at Mill Ridge taught me so much. Mrs. Chandler’s respect for the horse and her philosophy, ‘take care of the horse and the horse will take care of you,’ was ingrained in me at Mill Ridge,” Cooper explains. “For someone who was seeking to gain knowledge working with yearlings, I couldn’t have landed in a better place. I have so much respect for Donnie Snellings and his methods; I was able to learn so much from him and I am forever grateful.”

After spending nearly 5 years at Mill Ridge, Cooper was presented with an opportunity to move to Lane’s End Farm. There, he spent 4 years as the yearling manager, “where I was able to gain a better understanding and insight into the commercial aspect of the industry.” Established in 1979, Will Farish is the owner and founder of Lane’s End Farm, which comprises more than 2,300 acres in both Woodford and Fayette counties. Farish has raced more than 165 stakes winners and bred more than 300 stakes winners, and has won Horse of the Year accolades multiple times.

Lane’s End sells at every major sale, breeds and boards mares. “And I had a front-row seat at one of the best-run organizations in the world,” Cooper explains. “It was a great experience and important step for my career. The Farish’s, Mike Cline and the rest of the Lane’s End team are first class.”

From Lane’s End, Cooper went on to manage St. George Farm for Ian Banwell, a client of Lane’s End and a highly respected proponent of Thoroughbred breeding and racing. St. George was a medium-sized, private commercial breeding operation, which also had a sizable racing stable. “This was the first time in my career that I was able to put all my experiences together and apply it on a daily basis to run a farm. I spent 3 years managing St. George Farm before coming to Mt. Brilliant and I am proud of the accomplishments the farm made under my management,” says Cooper.

Cooper is now the Farm Manager of Mt. Brilliant Farm in Fayette County, Ky. The farm, which is over 1,200 acres, offers boarding and sales prep, and owns horses in training and actively racing, as well. In addition, the farm hosts polo matches and boasts phenomenal gardens, which include a taxus maze, kitchen garden, flower garden and vineyard. 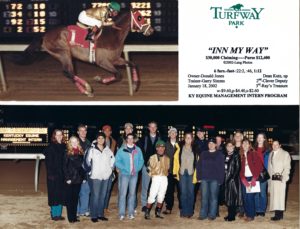 KEMI: Laying the Foundation for Success

Cooper is adamant that KEMI was instrumental in helping him create such a successful career path. “KEMI serves as a launching pad for students wishing to pursue careers in the Thoroughbred industry. The model, comprised of networking, hands-on experience and coursework, has proven to be successful for almost 20 years. KEMI provided the foundation I needed as I was starting to build my career,” he explains. “If you have an interest in the Thoroughbred business, regardless of career path, this experience is a must,” Cooper says. “KEMI provides a built-in system for networking and building a knowledge base within the industry you can’t find on your own.”

KEMI students have to have some stick-to-itiveness, Cooper says with a laugh. “Everyone on the [Wimbledon] farm was trying to make me quit!” Even with the good-natured ribbing, Cooper knew he was meant for the Thoroughbred industry. “During orientation week [at KEMI], we went to a bunch of big farms and saw the stallions, like Giant’s Causeway. It’s an experience I will never forget … I really felt like I was a part of something bigger.”

Like every KEMI grad, Cooper acknowledged that there was a steep learning curve when he was placed on the farm. “I found working on a Thoroughbred farm initially was quite challenging because I was trying to learn as much as I could while still trying to do the best work possible,” he explains.
What he learned on Wimbledon Farm has translated to each of his subsequent career moves, where he garnered additional information and tactics he added to his management toolbox.
But one thing permeates every position he has had, on every farm: “No matter what your position is, take advantage of it, work as hard as you can and learn as much as you can, so you can apply that knowledge base as you progress in your career. And don’t be afraid to ask questions!” Cooper says.

Now married with three children, Cooper acknowledges that working on a farm is much more than a full-time job. Racing has taken a backseat to breeding (and kids); “to stay up with it all is still another full-time job!” he says.

Though he may not get to the races as often as he would like, Cooper is making his mark on the Thoroughbred industry in his own way, working toward the same goal that was instilled in him from his days at KEMI: the betterment of the farm. 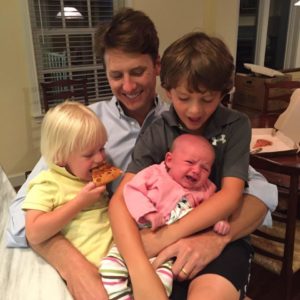