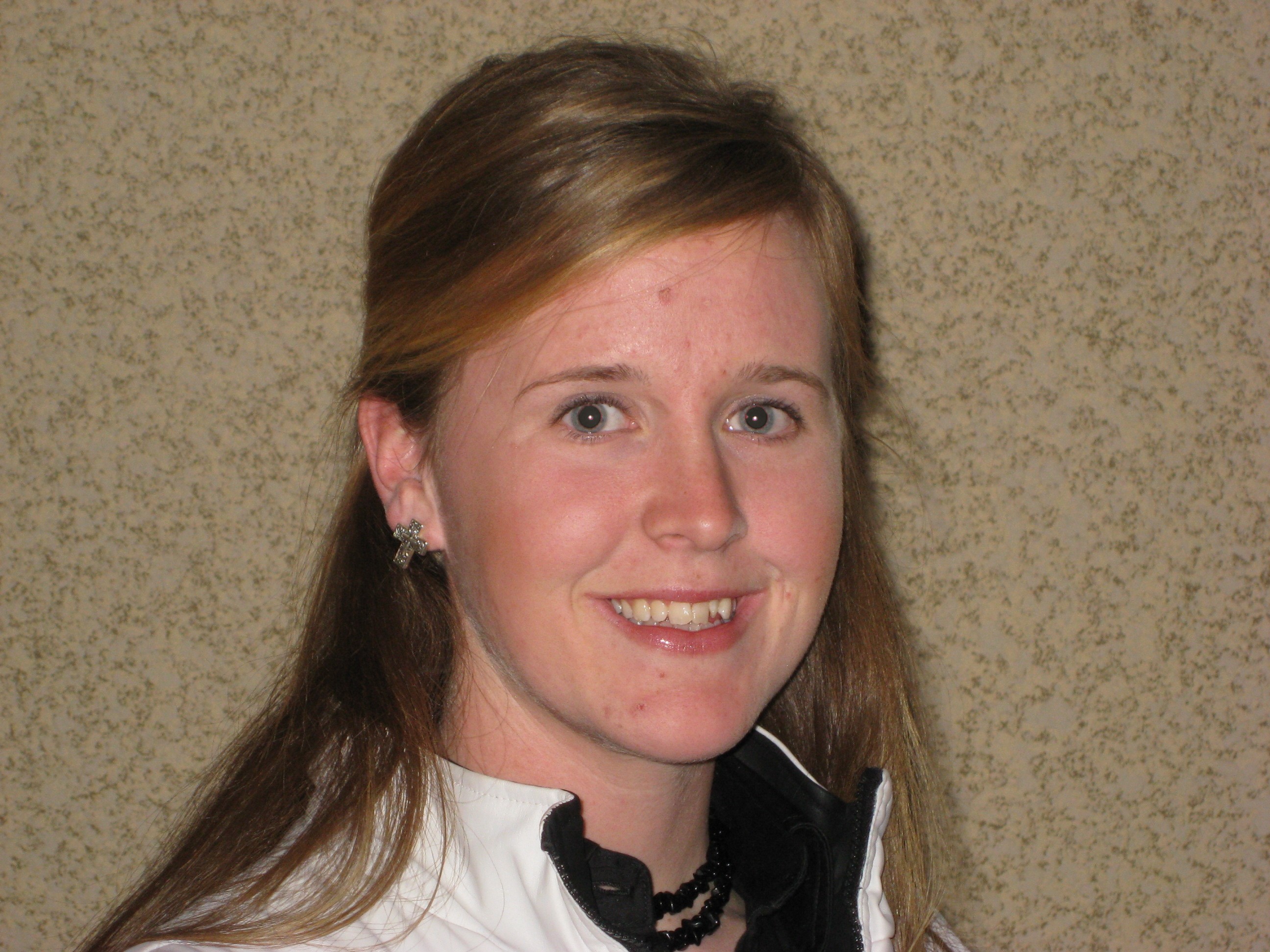 Growing up in Hershey, NE, Dr. Jackie Snyder hadn’t given much thought to becoming an equine-specific veterinarian. A “cattle kid through-and-through,” Jackie was very competitive in livestock judging throughout her high school and collegiate years. Though she knew she wanted to be a vet, she had assumed she would work in a mixed-practice setting, where she could capitalize on her bovine experience.

This intense involvement in livestock judging during high school allowed her to travel multiple times to the University of Nebraska-Lincoln (UNL) campus, where she not only felt comfortable, she felt confident that she could judge at the collegiate level and represent the school.  Setting goals and achieving them has always been a part of Jackie’s life, and judging while in college was a large goal she set while in high school. Jackie was a formidable opponent when it came to judging; her junior year of high school, she was part of the only all-female judging team to sweep the Nebraska state judging competition in Lincoln, besting more than 34 teams (mostly made up of males). This victory bought the team a spot to the national competition in Louisville, KY., in 2001, becoming the only all-female team in the nation to qualify for the prestigious event. Jackie has used the skills she honed in livestock judging, including the networking skills and the confidence to think on her feet while public speaking, in every facet of her career. Networking played a role in not only her acceptance into college, vet school and the KEMI program, it allowed her—and continues to help her–expand her professional contacts. After Jackie completed her four years an UNL with a degree in Animal Science, all while remaining fiercely competitive in livestock judging, she set her laser-like focus on vet school; she applied and was accepted into the Iowa State University College of Veterinary Medicine. Since 2007, Nebraska’s Professional Program in Veterinary Medicine (PPVM) has allowed in-state students to complete two years of veterinary medicine at the University of Nebraska, then transfer to the Iowa State University College of Veterinary Medicine, a partner institution, for the final two years of study, while continuing to pay in-state tuition.

The Exposure to All Things Equine

Though Jackie didn’t grow up around horses, she was extremely well-versed with cows; she grew up on a cow-calf operation and her father ran a feedlot. Being around and handling large animals was not new to her; though horses are innately different from cattle, the ability to handle livestock well, as well as project confidence around animals many times her size, has served her well throughout her career. “I had worked for a mixed-animal practitioner during the summer, and he did a lot of equine work,” Jackie explains about how her interest in horses was piqued. “I really liked it, but I realized that my equine-handling skills needed work before I went to vet school. I decided there was no better place to learn then Kentucky!” Jackie hadn’t been back to the Bluegrass since high school, but she had met Leslie Janecka in passing at a career fair as a freshman (goal-oriented, remember?). “I met Leslie and grabbed a pamphlet that talked about KEMI. I didn’t think I would have time to enroll in KEMI as an undergrad, so I set the information aside,” she explains. Then, there were some (now-fortuitous) logistical problems the year Jackie was supposed to be on the UNL Livestock Judging Team. “I opted to stay another semester so I could judge,” Jackie explained, “and that opened up a spring semester [2008] where I needed something to do!” And she still had the pamphlet…. Jackie sent in her resume. “I honestly didn’t think they would accept me since I didn’t have a ton of equine experience and none outside a clinic setting,” Jackie says. “I remember Googling my placement farm [Mill Ridge Farm] the day I got my email and falling in love!” she says. “It was a gorgeous farm with such a rich history.” Leslie began sending emails to the incoming KEMI class, reminding them how tough the internship program was going to be. “I felt like I was pretty tough, but it did make me wonder!” Jackie said. 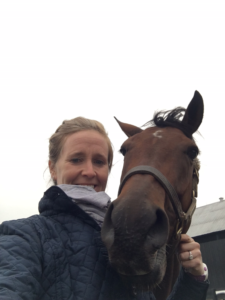 Jackie thrived at Mill Ridge. “I just loved the day-to-day process,” she explains. “From breeding mares to foaling mares and watching the foals develop into racehorses, it was great to be a part of the team that cared for these animals.” Her favorite part of her time at Mill Ridge was the foalings. “It was great to see the babies emerge and try to figure out their legs, and how to nurse,” she says. This exposure to the industry while on the farm only solidified Jackie’s desire to be a vet. Though the KEMI spring semester officially ended in June, Jackie stayed on at Mill Ridge to help prep yearlings before heading back to start vet school. Jackie is adamant that KEMI has helped her in vet school and also in the role she has now as an Associate Ambulatory Veterinarian for Hagyard Equine Medical Institute. KEMI has helped her “better relate to what my clients do on a day-to-day basis,” she explains. “KEMI also taught me a lot of horsemanship skills.” In addition to tangible skills she gained through KEMI, Jackie strengthened one of the skills she used in livestock judging while in the heart of horse country: networking. “On my day off from KEMI, I would often ride along with Dr. Stuart Brown, Mill Ridge’s farm veterinarian. He was and is a wonderful mentor to me,” she says. “After several weeks riding along with Dr. Brown, he opened some doors to help me shadow other Hagyard veterinarians in the field as well as in surgery and medicine. I loved the clinic, the level of care they provided to their clients and I felt comfortable there,” she says. True to the diligence and foresight that had served her well in years past, Jackie stayed in contact with Dr. Brown through veterinary school and returned to Kentucky for a few weeks every year to shadow veterinarians at Hagyard. After graduation, Jackie applied for and was accepted into Hagyard’s ambulatory internship program. “After my internship, I stayed on as an associate, where I’ve been growing my practice ever since,” she explains. So what, in addition to having goals, does Jackie feel has best served her in the equine industry? Her ability to “sign up and show up.” The equine industry is great and offers young people lots of room to grown and create their career, she says. “But you have to show up ready to have some fun and work hard.”

Jackie carries the “show up and work hard” mentality into every facet of her life. “My husband and I joke that our family motto is ‘There’s no good time, so why not now?’” she says. “I’m often trying to find that perfect time to accomplish a task, but really, getting started is usually the toughest part.” “If you are thinking about the KEMI internship, just sign up. It won’t be perfect, and sometimes it might even be scary,” but it’s worth it. “Be an advocate for yourself. If you show up and learn to love the process, you’ll learn a lot and have a great time.” 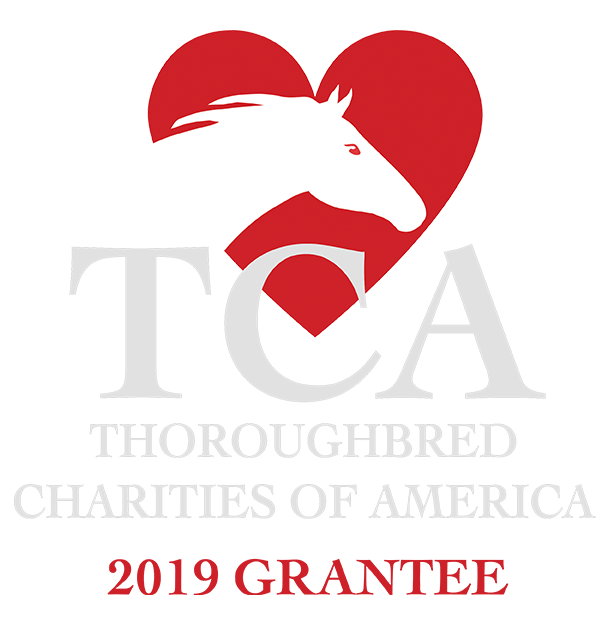